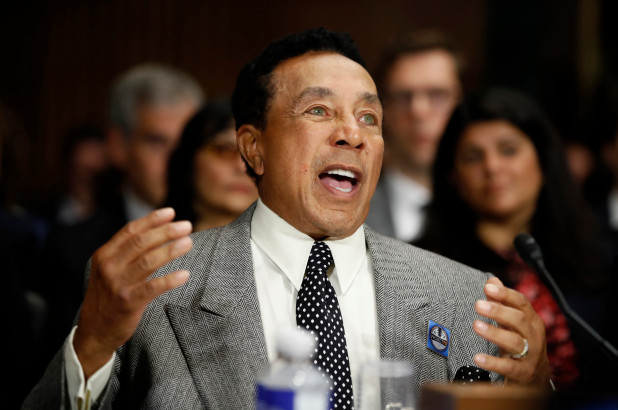 Smokey Robinson was the star witness before the Senate Judiciary Committee on Tuesday as he lent his support to a bill that would force internet radio stations to pay royalties for music created before February 1972, arguing that it would help artists who are getting up in age.

And he had some high-power backup from Dionne Warwick, Mary Wilson and Darlene Love.

“I know a lot of musicians and producers and writers who have fallen on hard times and who could really use that money,” Robinson told lawmakers. “It’s a livelihood thing.”

Robinson, 78, would be among the beneficiaries.

The Music Modernization Act — which passed the House unanimously last month, with its Senate counterpart introduced Thursday — would “fix the quirk in the law,” as Robinson put it, to get pre-1972 recordings covered as well.

Robinson said that under the current federal license, his songs and songs by The Miracles are streamed 50,000 times a day.

“An arbitrary date on the calendar should not be an arbiter of value,” he argued.

Robinson is in good company as the Music Modernization Act has the broad support of the music industry, including performers, songwriters and publishers.

It changes how songwriters get paid.

Songwriter Josh Kear, responsible for such hits as Carrie Underwood’s “Before He Cheats” (2007) and Lady Antebellum’s “Need You Now” (2010), appeared alongside Robinson and asked the committee to “swiftly adopt this historic legislation.”

“We have lost our entire middle class of songwriters, they’re gone,” he said, explaining that the outdated way songwriters are compensated has allowed writers to be paid “fractions of pennies on the dollar” for their work.

The compromise legislation also has the backing of digital service providers.

Lawmakers on both sides of the aisle were keen to see the bill passed too, shelving their partisan rhetoric for a day to instead praise Robinson and musicians such as Warwick; Karla Redding-Andrews, the daughter of Otis Redding; Wilson of the Supremes, and Love of the Blossoms, who had showed up to the hearing and were sitting in the crowd.

“We don’t often have this much artistic talent in this effort, so we’re lucky to have you here as well,” said the committee’s chairman, Sen. Chuck Grassley (R-Iowa), pointing out the presence of Warwick and the others.

Turning his attention to Robinson, he labeled him a “legend.”

Other lawmakers tried to show off to Robinson by inserting song lyrics into their banter.