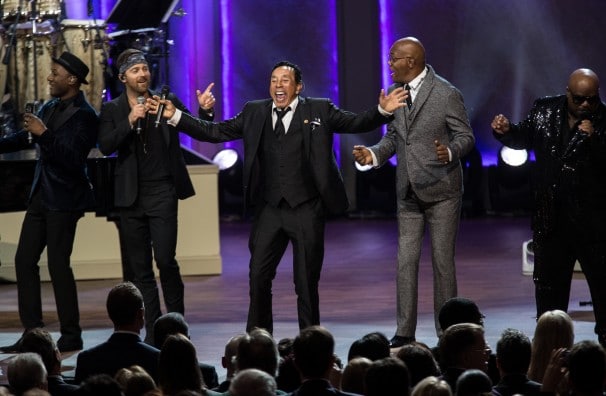 View Photos
CeeLo Green, Ledisi, BeBe Winans and more sang tributes at the Library of Congress’s ceremony.
By Chris Kelly November 17
On Wednesday night, Smokey Robinson received the Library of Congress Gershwin Prize for Popular Song, joining the esteemed company of songwriters such as Paul McCartney, Stevie Wonder and Billy Joel. First bestowed in 2007 to Paul Simon, the prize recognizes work that has a “significant and uplifting influence on the world of music and on our society as a whole.” The only thing debatable about Robinson’s winning of the Gershwin Prize is why it didn’t happen sooner.

To mark the occasion, the Library of Congress presented an all-star tribute concert at DAR Constitution Hall. Hosted by Samuel L. Jackson and set for broadcast on PBS in February, the event brought together a wide array of musicians and a well-heeled D.C. audience to celebrate the music of a legend who — as Motown founder and Robinson collaborator Berry Gordy put it — expressed “ordinary themes in extraordinary ways” and wrote the “soundtracks of our lives.”

Robinson’s songs — whether written for himself and the Miracles or other Motown artists — have soundtracked so many lives because of their emotional universality. They transcend time, space, performer and genre, and the event was programmed to illustrate that fact.

Jazz artist Esperanza Spalding turned “Tears of a Clown” into a theatrical ray of sunshine, while Kip Moore gave a country touch to “I Second That Emotion.” Gospel legend BeBe Winans brought the audience to church with the Temptations’ “It’s Growing,” and Corinne Bailey Rae dazzled it with a delicate performance of “Ooh Baby Baby.” And pop-R&B diva JoJo stole the show and proved she has the range, delivering not only a melismatic take on Motown standard “Who’s Lovin’ You” but providing a sultry counterpoint to Gallant’s glass-breaking falsetto on “Cruisin’.”

Big stories in the entertainment world as they break.

Unfortunately, not every performance on the bill properly honored Robinson. Canadian trio the Tenors — who had the misfortune of following JoJo — covered “Shop Around” and “Special Occasion” but felt like a nod to the white-bread doo-wop artists who pilfered black music before Motown became Hitsville USA. And while the inclusion of 13-year-old viral star Tegan Marie was intended to show that even our youngest musicians love Robinson’s music, her performance felt better suited for a prime-time talent competition than such an esteemed tribute. Not that the gracious Robinson would ever complain. In his humble acceptance speech, he thanked the audience, the Library of Congress and barrier-breaking Librarian of Congress Carla Hayden (who received some of the evening’s most rapturous applause) for putting him in the same company as George and Ira Gershwin, whose songbook was a staple of his childhood home.

Then he did what the audience had been waiting for, singing “Being With You” and the Gershwins’ “Love Is Here to Stay” — his boyish falsetto shockingly sharp, even at 76 — before leading the crowd and the other musicians in a performance of “My Girl.” The latter was a much-needed moment of unity, love and joy just a week after one of the most divisive elections in American history.

As Jackson joked earlier in the night, “If we want to make America great again, we should make people walk around singing Smokey Robinson songs.”