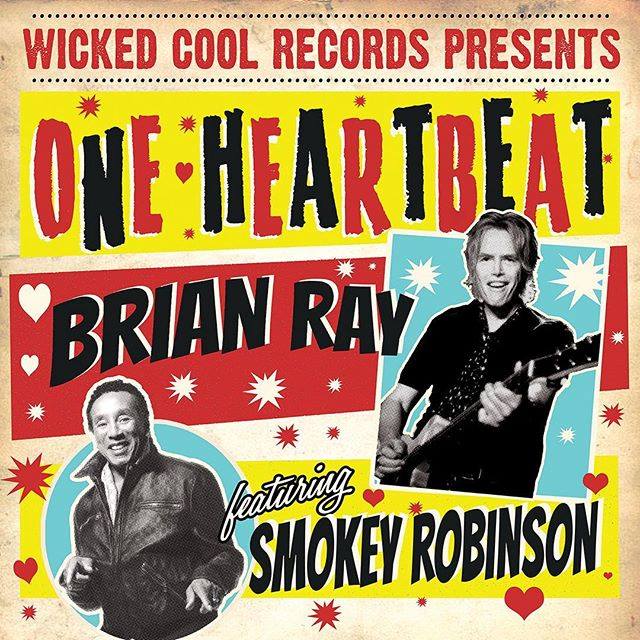 ‘Reluctant rock god’ Brian Ray is back with a garage-soul cover of the 1987 hit “One Heartbeat”, boasting hot ‘n’ fuzzy guitars, roaring brass and featuring the original man himself: Mr Smokey Robinson!But before we get into the nitty-gritty of “One Heartbeat”, let’s take a brief look over it’s history.

Brian and his writing partner Steve LeGassick originally penned “One Heartbeat” for Smokey Robinson back in 1987, after being told by Smokey’s producer that he already had plenty of his own material for the new project and were instructed not to submit any more songs for consideration.

In spite of this knock, Brian and Steve submitted a demo of “One Heartbeat” – which the producers and Smokey loved – and the rest is history! It became a hit for the singer, having the album named after it and being chosen as the second single.

And it was all down to the bravery and perseverance of the two tenacious songwriters! So if anyone has a right to record and release a version of “One Heartbeat”, it’s most definitely Brian!

While the original is dripping in the classic 80s sound – complete with saxophone solos and synthesizers – Brian’s reinvented version brings the track bang up to date with fuzz toned guitars that melt and meld indistinguishably with the real horn section. The powerfully thumping drums drive “One Heartbeat” neatly along, and while Smokey’s original vocal has a yearning, almost lonesome quality to it, Brian’s strong and clear voice provides a confident, insistent twist with more than a hint of pent-up excitement.

And to add the cherry on top, Smokey Robinson makes a guest appearance dodging, ducking and diving around the track adding magical, soulful interjections in and amongst the crunching guitars, spanking brass and one hell of a fun screeching guitar solo.

Speaking about having him appear, Brian said, “I invited Smokey to join in, to add whatever he felt. Well, he said yes, and I feel honoured beyond words that he came to the studio to offer some of his vocal charms to this new version of his hit record!”

Being the competent and proficient musician that he is, Brian handled guitars, keyboards and vocals, but he was also joined in the studio by Davey Faragher on bass and Erik Eldenius on drums and percussion.

On top of it all the Texacali Horns add a brassy, ballsy shine to “One Heartbeat” with Darrell Leonard on trumpet, Joe Sublett on tenor saxophone, and Tom Peterson on tenor and baritone saxophones. The section is a sweet, subtle nod to early Motown.

And lest we forget the massive talent in the studio’s control room: Joe Zook and Jose Alcantar competently handle the recording process at East Studios and Bad Manors respectively, while Eric Boulanger mastered and polished the whole thing up to a rocking gleam at The Bakery.