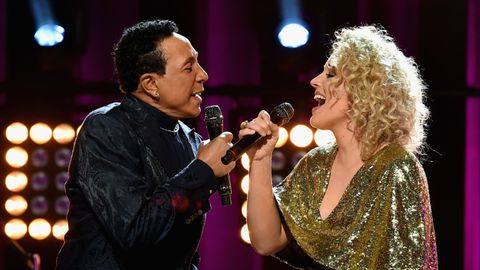 When Cam and Smokey Robinson collaborated live on the all-new CMT Crossroads, Cam shared the spotlight with an American music icon who wrote some of the most recognizable hits on the planet.

Backstage after the show, Cam admitted she felt slightly nervous leading up to their performance, but it would be wrong to not feel a little anxious singing Motown’s most popular hits with the person who wrote them.

Still, after decades onstage, Robinson himself gets nervous before every performance. “You don’t ever know for sure [how it will go] really until you go out there and do it,” Robinson said of his Crossroads concert with Cam. “I felt pretty confident because I know not only is this woman a great songwriter, she’s a great singer. I just have to get myself together so she would be too good. But this is a great woman, and she’s a great person. That makes it so much easier, and I think we blend better when we feel like that about somebody.”

“I have to say I canceled another show to be here,” she said. “That’s how bad I wanted to be here, and I’m so excited to be here. Knowing that he is him, I was definitely intimidated/terrified to do this, but what can you do? You love music, and you’re not going to turn it down. And singing with him, he’s such an easy person to be around.

“He’s full of stories, too. hanging out and then all of a sudden, he’ll be like, ‘Oh yeah, that song I got as a tape from Stevie Wonder at a Christmas party one time.’ And you’re thinking, ‘What?’ Then he’ll say, ‘Marvin Gaye? He lived around the corner from me.’ He’s such an easy person to be around, and so it helps with the nerves for sure. But if you don’t have nerves getting onstage, I think you probably should get out.”