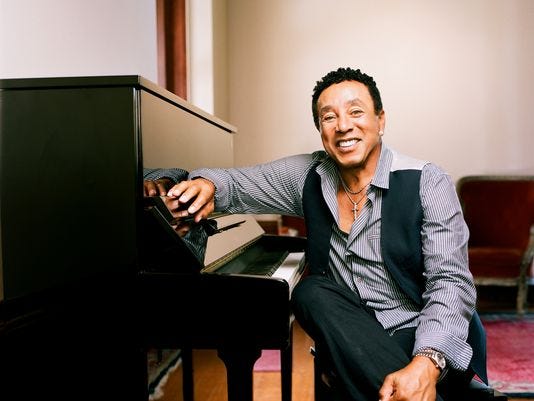 A new version of the song with John Legendpremieres at USA TODAY. The track will appear on Robinson’s new Smokey & Friendsalbum, due Aug. 19 on Verve Records.

Quiet Storm initially was the title track of a 1975 album for Robinson, his third after leaving the Miracles, the Motown group with which he recorded The Tracks of My Tears, You Really Got a Hold of Me, Ooh Baby Baby, Tears of a Clown and more than 20 other top-40 pop hits.

The track gave name to a popular ’70s late-night format that favored R&B slow jams, especially those that had some jazz in them.

“I didn’t think it would do something like that,” says Robinson, 74, who thinks of that 1975 album as his post-Miracles return to show business. “It was one of those surprise records for me.”

Robinson says he heard Legend cover Quiet Storm in concert several years ago and told him he should record it. “We just laughed about it, and here we are recording together,” Robinson says. “He’s a wonderful young artist and a great songwriter. For him to like one of my songs like that is a very flattering thing.”

Smokey & Friends features Robinson’s best-known songs performed as duets with the likes of James Taylor, Sir Elton John, Aerosmith’s Steven Tyler, Sheryl Crow and Mary J. Blige. Together, they remake hits that Robinson recorded with the Miracles and as a solo act, as well as tunes he penned for Marvin Gaye (Ain’t That Peculiar, sung with Taylor) and the Temptations (My Girl, cut with Miguel, Aloe Blacc and JC Chasez).

Randy Jackson, the album’s producer, assembled the guests. “He asked them their favorite Smokey Robinson song,” Robinson says. “Whatever song they said, that’s the one I recorded with them.” The stylistic diversity of the artists who appear on the album mean some songs got significant makeovers. You Really Got a Hold on Me, a No. 1 R&B hit for the Miracles in 1962, becomes a rock record when Aerosmith frontman Tyler sings it. “It’s got the rock guitars and the screaming organs, all that,” Robinson says.”We let each singer put their own take on whatever song they picked, then Randy produced it in that manner.”